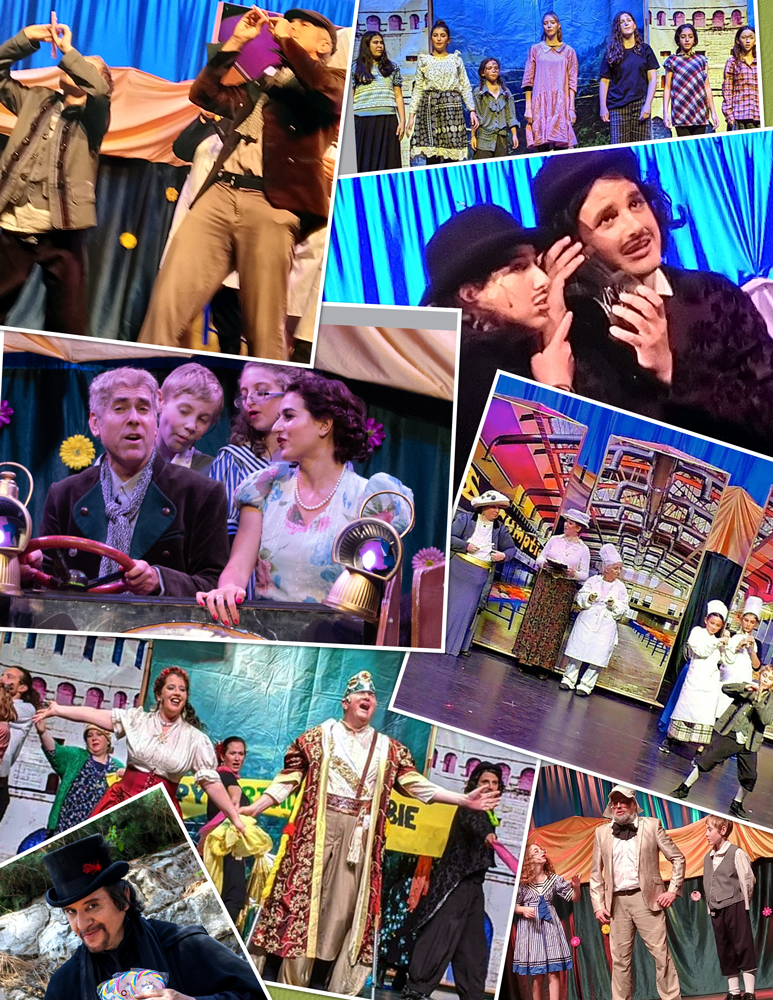 Chitty Chitty Bang Bang concluded its run in December, 2021. It was a heroic triumph of perseverence and love. Our first rehearsal was 18 months before opening night. The delay was caused by, of course, the pandemic.

But after restarting in May of 2021, we saw it through to an opening preview on September 23rd in Jerusalem. When the curtain opened and the first song started, the audience immediately began clapping along (as happened at every performance). In that moment, all the frustration and doubt of the previous year and a half evaporated into the joy of a magical show.

About Chitty, the show

Buckle up for adventure as the Potts family discovers that the burnt out old race car, that their father had fixed up, possesses extraordinary powers!

And because it is magical, the evil Baron of Vulgaria will stop at nothing to get it. Laugh out loud as he dispatches the silliest spies you ever saw to capture Chitty Chitty Bang Bang. On the way, discover the heroism of the oppressed children of Vulgaria as they take on their evil ruler.

Chitty Chitty Bang Bang is full of great music, hilarious comedy, and a romance that is Truly Scrumptious!

Meet the cast of Chitty

Is Vulgaria real? Can there really be a Baron and Baroness like that?

Vulgaria, home of the child-hating Baroness and toy-loving Baron, gains new focus in this wonderful retelling of the story. See just how a bunch of hidden children overthrow the evil empire that forced them into hiding. And see how a magical car made it all possible.

1. The story is deepened and enhanced

More than just a nice fantasy shared by the inventor with his children at the beach, the adventure in this version is real. Vulgarians are after Chitty, the car, and for good reason. It's a miracle on wheels.

All of your favorite songs from the movie are here, including Posh, Me Ole Bamboo, Toot Sweets and more. Ah, but there are additions that you will love. "Teamwork" becomes a second refrain in the show and will stick in your head and heart. There's a fetching Samba dance, and character songs for the goofy spies and others.

The film was delightful. The stage show is a comedic romp. You and your kids will laugh out loud at the antics of the goofy spies, the eccentric Grandpa, the ridiculous Baron and Baroness and the ancient Inventors. There is slapstick and quick-witted repartee, together with a show of farce.

.. audiences felt it was flying as they soared along with it. A large cast of all ages created this musical. The commitment of many actors who were cast more than 18 months before and persevered to bring Chitty to the stage is remarkable.
We think that's magical too.